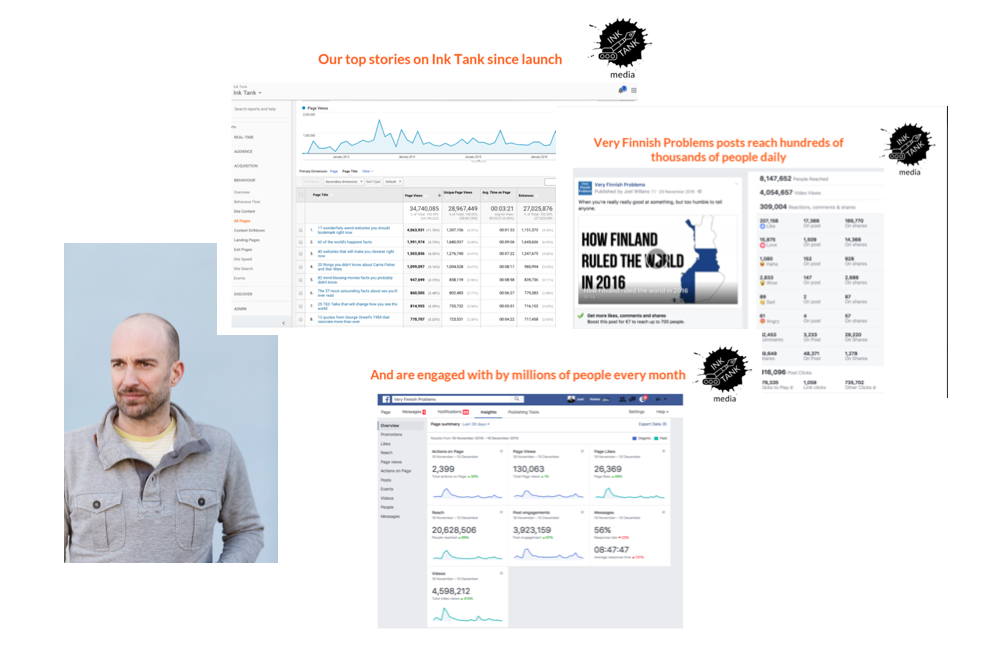 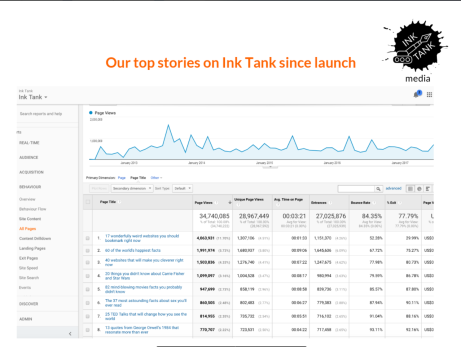 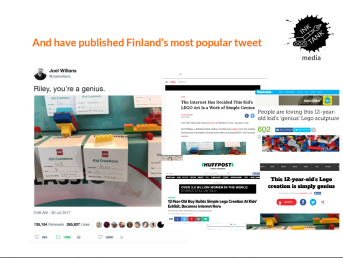 So this is my blog’s third interview around measuring success, this time in English because why not! A Facebook page called Very Finnish Problems caught my eye last year because it seemed to generate huge engagement showcasing Finnish oddities, beating practically any Finnish rivals (yea, there’s the language question but still). And more importantly, the growth was organic.

– I’ve never boosted anything and I don’t think you should because Facebook wants you to boost your posts more and more. Paying for reach also lowers your organic reach, says Joel Willans (I have had similar experiences).

Anyone in the business of making content would be happy to gain such numbers as Very Finnish Problems Facebook page. The site’s average monthly reach is 15+ million. The average weekly reach is between two and two and a half million, and with not more than a dozen posts per week might I add. In Finland, this kind of reach is HUGE.

Reach in Facebook’s terms means the number of different people who have in some way seen the content in their newsfeed during any given timeframe.

Most of VFP’s Facebook audience comes from Finland but there is also a big international audience. ICYMI: Finland has a population of 5.5M and about 2,1 active Facebook users according to FB.

But it is not just Very Finnish Problems.

There is also Very Brexit Problems.

And now even Very Parenting Problems.

Joel Willans seems to have been doing niche long before niche thinking was as hot a topic as it is now in international media.

Very Finnish Problems is even a book.

Oh, and a podcast.

– That’s actually not a bad definition for it at all, he smiles after we’ve spent some time discussing the big picture.

You practice what you preach. I find this very interesting and fresh because so many in the business just preach, they don’t necessarily do stuff.

Ink Tank Media also has its own publication Inktank.fi which produces “cool stories for interesting people”. It has five hundred thousand monthly readers. 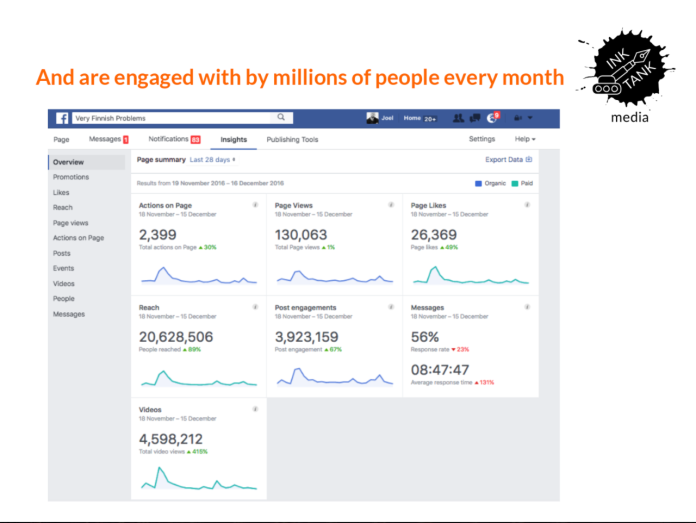 Even though native Facebook content has lifted Very Finnish Problems to Facebook stardom, Willans says he is actually not that keen on Facebook. He is much more interested in harnessing social media to generate traffic to one’s own site. It’s also about brand awareness but traffic is a key figure in measuring success for me, says the man who is, by his own words, obsessed about analytics. With Facebook he looks at the numbers as a whole and also individual posts’ daily performance.

In the past, he has worked for the viral giant The Daily Mail Group (didn’t like it though) and had his short stories read on BBC radio.  In the UK, he was also sales manager for tech magazines before coming to Finland and starting a career as a copywriter.

If you look closely, you can find videos in Very Finnish Problems’ Facebook feed that count as native advertising but unlike for example UniLad, Ink Tank Media doesn’t yet monetarise much of it’s video content.

– This one was (native advertising) but we did it pro bono, Willans shows me one of the more successful videos. He sounds like he just wanted to show the customer how much power social media has.

To my eye Willans has the soul of a publisher which is kind of what content marketing is all about.

The dream of Finnish Buzzfeed

– This one here annoys me, “Arvostettu””, I can’t stand their cheesy content, Willans laughs while showing me how many followers this Finnish language viral page has added lately.

– I actually used to have a dream of creating Finnish Buzzfeed, he says.

Haven’t you reached that dream already with Very Finnish Problems?

– Well perhaps on social but not web. But I think I could have.

Willans does not sound at all arrogant saying this which is a thing I want to underline. He is very humble about it all but knows what he has achieved. Willans is also a successful Redditor by the way but that is another story.

Niche thinking is one thing. For Willans timeliness is also key. Look around and react. Timeliness has been important in getting good SEO visibility for the articles (inktank.fi), he says. Google finds their articles very well.

– A good example is one we wrote on Carrie Fisher ages ago. Then two things happened, she got recruited for Star Wars movie and then she died. The traffic went through the roof.

There are certain topics he knows are good sources for ideas like the Finnish weather. With a passion for British politics, one of his most successful Facebook videos for Very Brexit Problems got him 25 000 new followers in a day. Organically. The video basically destroys UKIP leader at the time, Nigel Farage, titled “Nigel Farage resigns after completing his life work”.

”With your own site you have complete control”

While he enjoys the buzz of going viral (he was especially happy when recently he had a tweet retweeted over 135 000 times) virality alone doesn’t drive him.

Building online communities is much more interesting, Willans says. With a community you can have 15 years of fame, rather than just 15 minutes. According to him Very Finnish Problems is a great example of a thriving community that will keep going from strength to strength.

– But there is more fun in creating new pages and trying to make them grow.

As our discussion is coming to its end I find myself thinking about what Willans said earlier about traffic being his key metric. I ask him to explain his thoughts a bit further. He says putting all eggs into the social media basket is risky because your account could be deleted at any time without warning and then there is the algorithm part as well.

– With your own site you have complete control.

You’ve just read the first English language blog post of my blog Numeroiden takaa (“Behind numbers”, you can find it also in Facebook here) which deals with measuring success. My name is Kalle Pirhonen and I work as an audience editor for the News and Current Affairs department at Yle, the Finnish Broadcasting Company. For more details of me, please see Newswhip’s interview from Aug 2017 here.

Previous interviews in this blog (in Finnish):